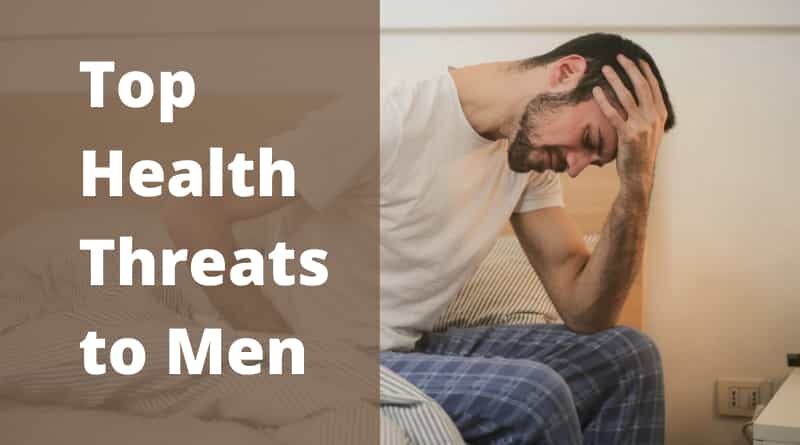 For generations, men have had to follow the principles and ideals set by society. They are not allowed to show their emotions easily or cry, or have weak stamina in bed.

But lest we forget, men are human after all, aren’t they?

Why is it easier for women to show they need help and not for men?

Maybe it’s because women have been given the title of “emotional homo-sapiens” who are more prone to be damsels in distress.

That being said, bottling up emotions and overlooking serious health problems won’t do you any good in the long run.

Eventually, if those problems won’t give you a heart attack in the future, a heap of medical bills will do the job!

So pay attention to these five health issues if you want to ward off your early demise!

Non-communicable or non-infectious diseases rank high on the list of conditions that are taking lives every day.

There were infectious diseases such as malaria, tuberculosis, or typhoid that did their dark deeds in the past. However, now the tables have turned!

Heart disease can be caused by various issues such as smoking, being overweight or obese, and sometimes congenital malformations (genetic defects).

When it comes to men, you’ve probably heard of the notorious “beer belly” – the fat that surrounds the major organs of your belly. While most often it’s said in a joking manner, it’s anything but funny.

The severe accumulation of fat around the belly will lead to the closure of your main artery that transports blood and oxygen to your heart.

As mentioned earlier, the beer belly doesn’t just pop up out of nowhere. It is mainly caused by heavy alcohol consumption and overeating.

Since your liver is one of the major organs covered by fat, it will start to malfunction and lead to a condition called “fatty liver disease.”

Fatty liver disease leads to poor digestion, a further increase in fat deposits inside your arteries, and an increase in potential toxins in your blood.

Your prostate is that tiny gland situated in the pelvis, between your penis and your bladder.

Though it doesn’t play a significant role like your liver, it’s still a gland. And if it’s a gland, it means that it’s susceptible to diseases such as cancer.

Prostate cancer can start small but then propagate into other areas. So it’s essential and highly advised for adult men to visit a doctor for a yearly prostate exam.

It’s the disease that develops in your lungs and causes complications such as chest pain, wheezing, excessive coughing, and mucus buildup.

As it’s related to your lungs, you can guess which culprit is responsible for this.

Chain-smoking cigarettes or casually smoking the hubble bubble will destroy your lungs from the inside and char them from the outside.

So next time your friend offers a smoke, have the willpower to say NO!

Mental health is not easily diagnosed in men since men often tend to hide their emotional pains.

If the stigma around mental health is lifted, you can bet many men will be checking into a psych clinic!

There’s nothing wrong with going to a psychologist or psychiatrist to treat your brain. Your brain is also a part of your body that needs careful care and attention.

Long-term abandonment of mental health issues can result in chronic depression, suicidal tendencies, anxiety, and a massive drop in libido.

Very low libido can increase the chance of suffering from premature ejaculation or erectile dysfunction.

Hence, it’s essential to visit your health practitioner when you sense that the gears are not working correctly in your head.

Emphasize Your Sexual Efficacy with Vidalista 20

6 Debunked Myths and Misconceptions About Infertility

Emphasize Your Sexual Efficacy with Vidalista 20

What Conditions Are Best Treated With Acupuncture?

Finding the Best Eye Hospital in the UAE

Cloth Masks vs. Surgical Masks: Which Are Effective?

Understanding How Getting Dental Implants Work

Steps to Getting a New York Medical Marijuana Card

What are the Effects of Applying Coaching, Counseling, and Mentoring?